A Scary Thought: When The Knife Guy is Also Trained in Ground Fighting…

Knife defense largely surrounds the idea of defending against an aggressive but untrained attacker. What happens when that guy is highly trained in bladed arts and has a decent ground fighting game? In the continuation of the Bladed Grappler series, we explore this very scary possibility.

Its interesting that this type of thing didn’t seem to happen during the government shutdown.

Police are searching for a 21-year-old man who they say may have fatally shot five people Saturday morning across two neighboring parishes in Louisiana.

Dakota Theriot, is suspected of killing two people in Ascension Parish and three people in Livingston Parish, which are just east of the state capital, Baton Rouge.

Ascension Parish Sheriff Bobby Webre said during a press conference that dispatch received a call at about 8:45 a.m. about the two shootings, the victims of which were Theriot’s father, Keith Theriot, 51, and his wife Elizabeth Theriot, 51. 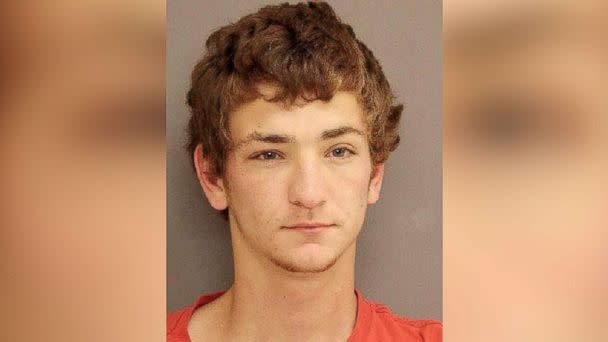 Shortly after the first call, the Livingston Parish Sheriff’s Office received a call at 9 a.m. about a homicide involving multiple victims. Those victims, according to a Facebook postfrom the Livingston Parish Sheriff’s Office, were Billy Ernest, 44, Summer Ernest, 21, and Tanner Ernest, 18.Webre called the first incident a case of domestic violence and said that Dakota Theriot was recently asked to leave the residence and not return.

“It’s been a long time since we’ve had anything of this magnitude when it comes to domestic violence,” Webre said during the press conference. “We don’t know the relationship between the father, the mother and the son at this time.”

Webre said Theriot is driving a 2004 Dodge Ram pickup truck — gray on top and silver on the bottom — that was reported stolen. He said it is believed that the truck belonged to the victims in Livingston, that Theriot had a connection to them and that he knew them well.

“There’s a lot of family members that are hurting right now and our prayers go out to those family members…they’re looking at us to solve this crime,” Webre said. “The good news is we know who did this.”

Webre added that although Theriot doesn’t seem to be targeting anyone else, he is “an armed and dangerous guy, so anybody who he comes in contact with could be a target.”

Theriot is suspected to be traveling toward Mississippi. He is wanted for two counts of first-degree murder, illegal use of weapons and home invasion in Ascension. Livingston hasn’t yet disclosed any charges.

This is not the first time Theriot has run from police. In 2017, Theriot was asked to exit his vehicle during a traffic stop but instead drove off, throwing suspected marijuana out of the vehicle. When he was arrested, police found marijuana and paraphernalia in his possession, according to the St. Charles Parish Sheriff’s Office.

It was day time on a crowded big-city street in a country far from home.  It seems my girlfriend and I attracted the attention of a gang of bag thieves.

I noticed a guy on an opposite street corner talking on a cell phone.  He caught my attention when he seemed to be pointing us out to some unseen other person.  As soon as he pointed at us we picked up a tail.  Two guys appeared out of nowhere and started following us very closely.  The dude on the cell phone supervised from a distance.

I slowed down our walking pace.  So did our followers. Not a good sign.  The man on the phone paralleled us from across the street.  I made a quick stop and forced our followers to walk past.  They didn’t like that at all and we could tell that it screwed up their plan.

It was quite the study in the criminal assault paradigm.  The two men were obviously together, but walking a half step apart to seem separate.  They weren’t talking.  One guy was pretending to look at a cell phone in a very unnatural posture (trying to look inconspicuous). The other was giving off constant “grooming cues” touching his face, neck, and hair as he nervously kept looking over his shoulder to check our position.

They were obviously up to something.  I warned my girlfriend and slowed the pace even more.  The two guys slowed down as well, keeping the same distance between us.  In between nervous strokes of his neck, I saw one of the men dart his hand into his pocket.  He pulled it out and had something gold and metallic-colored in his palm.  I couldn’t tell what it was, but it looked like brass knuckles of some sort.  Go time.

– Touching the face or neck

– Wiping at the nose or mouth

– Rubbing the arms or chest as if shivering

This week we take a documentary style approach in how to defend yourself in a fight when facing extreme violence.

Here’s how to avoid getting knocked out in one punch by not making these 3 epic fails in a street fight:

#1 ALLOWING SOMEONE TO MAKE THE FIRST MOVE

We get that you are a nice person and you don’t want to hurt someone, but the biggest fail is to wait too long in a confrontation to take action in your own self defense. This doesn’t mean that you should punch someone who gets in your face. What we are really saying is that you should recognize the danger signals of escalation of violence. Basically, look for warning signs so you can at least change your position or location, for example to minimize your vulnerability to say a sucker punch.

It is not always about punching someone first, it is more the case of prevention and control. You must gain control of the situation for your own personal safety and security. Be aware of the surroundings and never let someone have control over you in a fight.

#2 ASSUMING YOUR ATTACKER WILL MOVE HOW YOU EXPECT

One of the biggest problems you may face is to second guess how the person will attack you. This is often the case when people practice martial arts in a Dojo. A typical martial arts practitioner is used to a clinical and standardized way of fighting and moving. To a certain extent they are used to defending themselves against clear patterns of attack that they can see.

However, the reality is that someone that means you harm will attack you when you can’t see it coming. That’s the meaning of a sucker punch. We always say that the punch that knocks you out is the one that you often don’t see. So don’t get knocked out by one punch. Make sure that you keep your awareness about you. Most importantly don’t have any expectation that the bad guy will attack you in a certain way.

#3 NOT THINKING ABOUT YOUR OWN SAFETY: BELIEVING THAT YOU WON’T GET HURT

Some people think that they are untouchable and this leads to a false sense of safety and security in a confrontation. Worst amongst us are those that train in martial arts. While training in a martial art is a great thing to do for many reasons that do not relate to fighting, people in martial arts still feel that they have superhuman powers. That is, they think that they will never be punched in the face in a real fight. Of course, the opposite is true and very likely. Yet many martial artists are surprised when they are punched in the face and don’t react how they thought they would in a real fight.

An interesting way to stop physical attackers: the Sasumata or “Man Catcher” is a common form of self-defense in Asia. The more people that own one, the more effective it becomes. When a machete-wielding man took to the streets in this video, a number of citizens joined together to stop his rampage.

There is a hidden cost to MMA which is not always discussed, thus to know the Truth about MMA, we invite you to watch this short MMA documentary which will give deeper insight into how mma and brain damage are connected.

Although many sports have brain damage including boxing and football, it is not something to take lightly since in mma history we had more than once occasion where an mma fighter died in the ring due to heavy brain damage.

In this video you will see a statistic and truth about mma and ufc brain damage and how mma death can occur. While some of the bloodiest fights in mma doesn’t always end in death in the ring, it is important to remember that mma injury and mma trauma also accumulates with time and eventually leads to more important injuries such as permanent brain damage. If you want to avoid this we invite you to take a look at this video so you would better know what mma injuries can lead to so that mma death in the ring would become even less common.

Did you ever consider what price every MMA fighter has to pay, to give the thrilling sight to the audience? Join us in looking into a brief history of MMA and UFC and how it’s rules could actually have a devastating effect to the lives of our favorite fighters. Do you think the situation should change? Or is it supposed to be the way it is? Share your opinion in the comments.